Next time we go to a pumpkin patch, I should remember to dress the girls in orange so they can blend in!  Just a quick one from today ... we had a great weekend in Virginia ... I didn't take too many pictures, but that doesn't mean we didn't have fun, just that I didn't take many pictures  :)  .  Some more photos to follow later.

Annelee has developed a taste for popsicles.  Even when they are lime and she doesn't like the flavor, she will take a lick, pull a face, and then come back for more.  Will videoed some fun we had with her with a (more pleasingly flavored) popsicle last month.

This is the third year we've gone to Simmons Farm with Vivian, and Annelee's second.  The pictures from 2009 are here.  There are no pictures posted from last year, because Jenny and I took Rowan, Vivian and baby Annelee and Annelee was fussy the entire time so I barely managed to lift the camera up to my eyes.  I do have to try and find what pictures I took though, because I think I have another tunnel shot there with Vivian.

This time, we went early in the season and straight after a quick breakfast.  It was a glorious and sunny day, but not too crowded, getting much more crowded when we were leaving though.

The whole event is a "hayride" on a trailer pulled by a tractor down to the attractions (another sack slide - Vivian was very happy!), pick your own pumpkin and corn and then head back to the car again.

I forced the whole family into having their photo taken behind those silly cutouts ... sorry, Will and Vivian (Annelee didn't mind, she loved holding onto the hole and looking out).  It's all for the good of the blog!  :)

After taking tap and ballet last winter, we decided to have Vivian try something new this year.  So we signed her up for Gymkhana, which several of her friends had already taken and enjoyed.  Vivian enjoys a similar place called Gymsport where you can go and just do your own thing on the various gymnastic equipment, so we were pretty sure she'd like it.  This is the same thing, just with more equipment and instructions on what to do.

I don't think she is ever going to be an olympic athlete.  She's more like me who wanted to be good at it but wasn't.  In fact, I used to dread nothing more than the annual "sports event" (I've even blocked out the real name) where we all had to compete in gymnastics.  I always got the "also particpated" certificate.  Barely.  Anyhow.  Both Will and I think it's going to be good for her to learn some of the basics of gymnastics and the various equipment and to run and move around at least once a week when we are cooped up inside for the winter.  And, as I said, she really enjoys it.  She works hard at doing the excercises, some with more success than others (just like the other kids).  She listens well and enjoys herself.

So, imagine how lovely it was for her (and for us) when her teacher sent her this card in the mail!  I think they just guaranteed themselves a sign-up for the next session!  ;)

When I grew up, Halloween was not something that was known in Germany.  We did, however, not grow up deprived of collecting large amounts of candy by going from door to door in our neighborhood.  On St Martin's Day, we'd go out in groups with paper lanterns and candles, singing songs, and receiving candy.  As a total aside, I didn't realize until I just read it on Wikipedia that St. Martin's day is November 11 - Vivian's birthday.  May have to do use that as a birthday party idea one year!

Anyhow, this didn't stop my Dad from using customs from both of these holidays to entertain Vivian.  They carved a pumpkin together (which we finally found in a store, they were only just becoming available for the season), which then sat out on the back deck and illuminated the night for us (with faces on either side!) 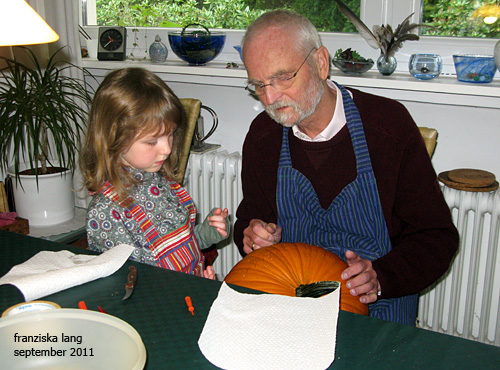 As another aside, seeing Vivian on this photo with my apron on reminds me also that she and Omi made Götterspeise (jello) one day.  Green and red, with vanilla sauce, yum.  Next visit, the colors of the traffic light are planned, as yellow will also be added.  For some reason, I have no photos of the two of them in the kitchen.

Anyhow, another night, the two of them dug out the paper lanterns, lit the candles and set out in the dark to walk around the neighborhood.  My Mom and I also went along.  We sang a couple of traditional St. Martin's songs ("Ich geh' mit meiner Laterne" and "Laterne, Laterne"), but, since it was still September, decided not to confuse people and ring at their doors and ask for candy  ;)  Vivian had a blast even without!

There's a different kind of zoo near my parents' house in Germany where the animals roam free(ish) and the people are in cages (well, their cars).  They also have a nice little amusement park attached.  So, one sunny weekday, Sebastian took a day off work and we all headed to Safaripark Stuckenbrock together.  The weather was really nice, but the summer vacation was over, so we almost had the entire park to ourselves.  There were just a couple of other cars driving through, and in the amusement park, every ride was just waiting for someone to say "we want to go".  Zero lines.  Perfect!

Everyone had a great time.  I especially enjoyed how much Annelee squealed when we saw animals through the window.  It seems to me that Vivian wasn't at all interested when we took her to the zoo in Pittsburgh at that same age.  Having said that, now she can't get enough of zoos (and amusement parks), so it was a given that she would have a blast (which she did indeed). 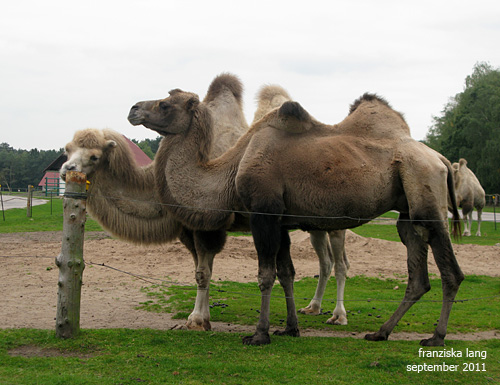 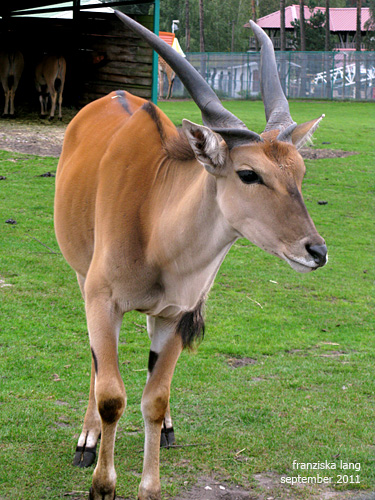 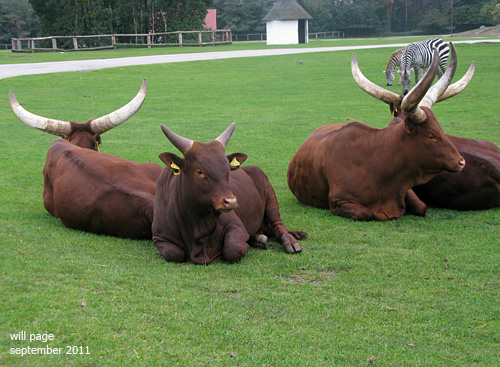 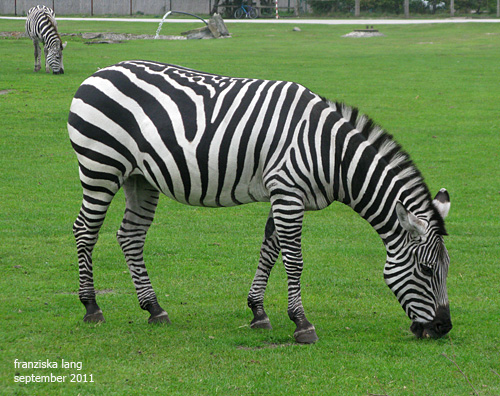 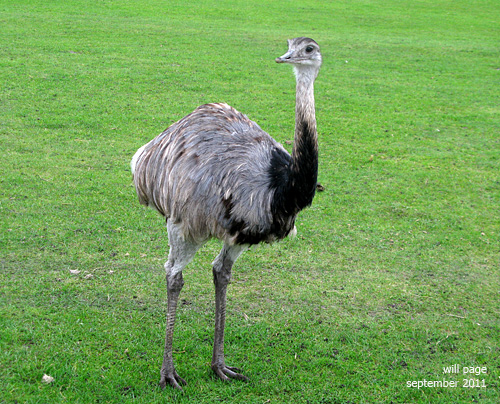 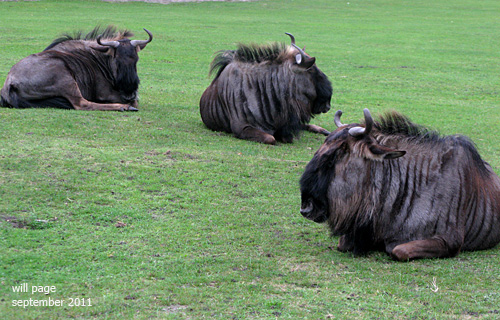 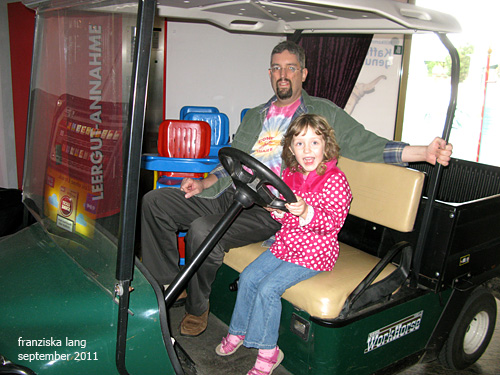 It seems to be becoming a trend for me to add a video at the end.  Today is no different.  Don't get too used to it though.

My parents live in a cul-de-sac with a circular turn-around.  For generations, this has been a place for kids to hang out and play.  A new generation has just discovered that.  We went out there several times, with Tobias, with Junis (the neighbor's grandson), by ourselves.  Chalk featured greatly in these endeavors (Vivian drew with it, Annelee ate it), as did collecting chestnuts and riding the "bike".


And here's a video of Vivian after she figured out the pedal-less bike thingy.

On our second day in Germany, we visited Marion, Sebastian and Tobias in their home.  They have a HUGE trampolin in the back-yard, and of course we all had to try it out (yes, Annelee and the adults, too).

My Mom's favorite story from that afternoon is Vivian and Tobias' communication (I missed that one, so this is hear-say).  Vivian was busy dismantling Tobias' lego house.  He was sitting next to her.

I'm not totally sure if Vivian ever responded.  But, on the trampoline we did go, and a lot of fun was had by all!

And, if that wasn't enough, here are two videos, too.

Click here if you can't see the video above.