Annelee at the Park

We were overdue for a trip to Virginia, and finally made it down there again.  We had a great time, it was fabulous that we got to see everyone!

The first morning we were there, I took Annelee to a playground while Will picked up Anne and Vivian went to watch Nate play a game (lacrosse?).  Unfortunately, the playground wasn't too suited to the under-2 crowd, so we just hung out for a while and took some pictures before heading back to Susan's house.

More pictures to follow ... but I decided it was easier to break the photos into chunks rather than to procrastinate trying to cram everything into one single post.

A couple of Fridays ago, we got together with our friends Angie, Jesse & Jaime to meet at Phipps Conservatory.  We had great fun wandering through the different rooms (the theme was different countries), and then having lunch there afterwards, although we waited entirely too long with the tired and hungry children for the ordered lunch to arrive, and I'm pretty sure everyone around us was happy when we finally packed up and left ...

I managed to go with a camera that had (a) almost no room on the memory card and (b) an almost empty battery.  Whoops.  The good news is that I therefore don't have 2 bazillion photos to look at to write this post.  The bad news is that some of them were taken with my phone...

When you are feeling a little sad and need a cuddle and a book, a big sister is just the ticket! 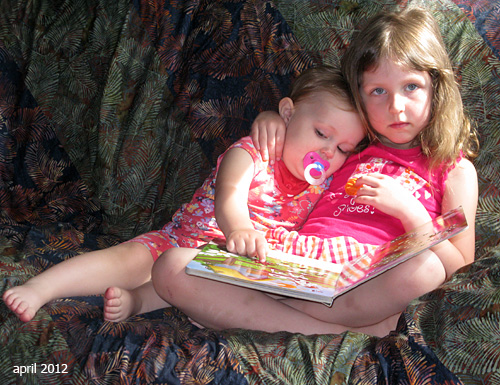 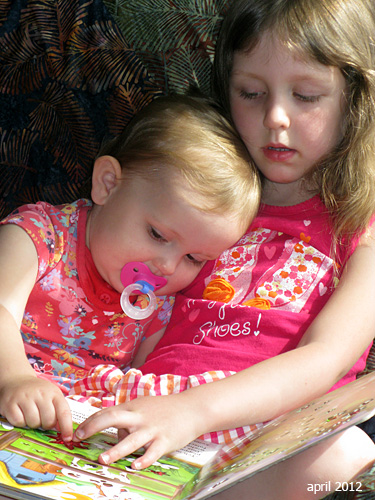 After several frustrating attempts to upload a post in the car using the regular website, I finally had a DUH moment, and remembered that there is probably an app for that. And there is. While I'm figuring out my phone, the girls are busy drawing pictures for everyone and Will is of course driving. Can't wait to see everyone this weekend! 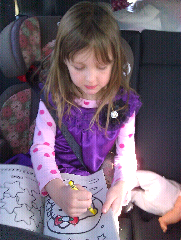 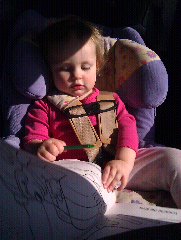 As is becoming tradition, I went out a few days before Easter and picked a few blooming branches off the local trees and then decorated them with the decorated Easter eggs that I have from my Dad, and the ones that I'm slowly decorating for the girls.

On Saturday, while Annelee napped, Vivian and I decorated hard-boiled eggs - not surprisingly most of them turned out pink and purple; and then Saturday evening, the Easter bunny got busy and hid some eggs and left a couple of filled baskets for the girls.

When I woke the girls up Sunday morning and asked Vivian if she wanted to check if the Easter bunny might have come, she said "He did come, didn't he?  I was a good listener yesterday, wasn't I?"  Apart from our diverging definition of a "good listener" and her thinking only yesterday counts, who knew that the Easter bunny was also dependent on good behavior.  I thought that was just Santa Claus.  I will have to milk that one next year.

Annelee found two eggs before she realized that you could open them and there was candy and money inside (the Easter bunny put quarters in some eggs when Will grew up, so we are continuing that tradition).  At that point, the search was of no interest for her, opening up the eggs was much more important.  That left more for Vivian, who, with a bit of guidance found all the eggs.

The Easter baskets contained a chocolate bunny, some hair clips and some Duplo legos - they are a huge hit in our house right now.

After breakfast, we headed to church for the next Easter egg hunt.  Annelee, when shown where some of the eggs were hidden, gladly reached into her basket and added hers to the hidden ones.  She has a lot to learn about Easter egg hunts  :)

Here are some photos from the day.   Enjoy!

I still don't know quite how to summarize our trip to Germany.  Apart from the very obvious heart-ache of my Dad dying and us going over for his funeral, and the added (luckily all since resolved) issues of Will having an asthma attack and earning himself a stint in the hospital, Annelee needing antibiotics for pneumonia, my breaking my toe, and my Mom suffering from sinusitis when we finally left, there were also a few positives that came out of this trip, and I think I will just focus on those ...

We had planned on going for a little over a week, but ended up staying for two.  For the majority of that time, Will was in the hospital, so this meant for our girls that they were surrounded only by German speakers.  Vivian's German skills just blossomed; and she even ended up going to my old Kindergarten for a couple of hours to alleviate the boredom of being in Germany with my always dashing off to the hospital and none of her regular friends to play with.  Vivian had such a great time, she was sad she couldn't stay for lunch with the other kids.

As an aside, just the other day, we had the following conversation:

Vivian: "Mommy, I really liked your Kindergarten.  When we go back to Germany, can I go again"?
Me:  "I don't think so.  That was just an Ausnahme ("exception" - one of the German words that made it into our family's English vocabulary) because Daddy was in the hospital."
Vivian: "When we go to Germany, and Daddy goes to the hospital again ..."

I then had to explain why we don't actually want Daddy to go to the hospital.

Since Will was in ICU for several days and Vivian couldn't come with me to see him, they started sending little videos back and forth (what did people do before smartphones?!) and telling each other knock-knock jokes.  It was very cute!

Vivian started speaking German to pretty much everyone; my Mom, strangers on the street, my brother and his family, even Annelee.  She still to this day pretty much refuses to speak any German with me, though. "Mommy, I'll speak German to you when I'm big."

Our super-clingy Annelee got comfortable enough with my Mom so that she could even get her out of her crib and spend time with her ... as long as I wasn't in the room and she didn't see or hear me ... once that happened, all was generally lost.

We got a spend extra time with Sebastian and Marion, and Vivian and Tobias got to play together.  It would be so nice if they got the opportunity more often, but until a reliable teleporting process is developed, this is not going to happen too often, so we savor it when it does.

And then of course there's my Mom and I getting to spend extra time together, even though much of our downtime was taken up with my going to the hospital whenever the girls were napping.

In the evenings, I usually left before Vivian was in bed, so my Mom and Vivian even got to develop their own bed-time routine, too.

Here are a couple of photos taken during that time.

And, as the finale, one of Vivian's very own knock-knock jokes ...