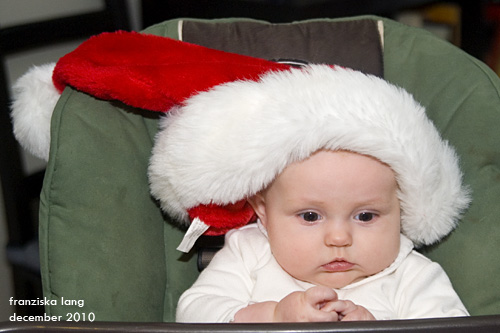 As in previous years, the German Nikolaus paid a visit to 745 Gypsy Lane this year.

Because Annelee doesn't yet wear shoes, I asked Vivian to pick out a shoe from the big box of outgrown shoes of hers.  Big mistake.  She wanted to try on every pair, no matter how often I told her they wouldn't fit.  She finally picked a pretty black one.

I then asked Vivian to pick one of her shoes to put out, too.  She kept telling me in a very worried voice that she, too, needed a "nicause shoe".  None of her own were acceptable.  I finally figured out that she needed a "Nikolaus shoe".  We settled on her tap shoe.

The next morning, Vivian went downstairs to discover the gifts the Nikolaus had brought for them (a stamp and coloring kit for her, a rattle for Annelee).  Both toys were a hit. 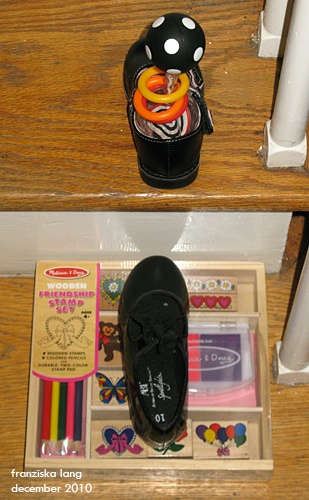 Vivian immediately started stamping (yes, they are supposed to be used on paper, and yes, the ink is water-soluble) 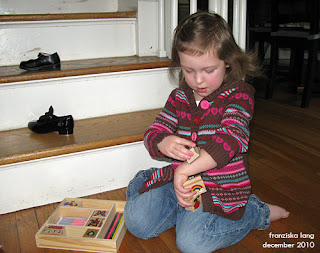 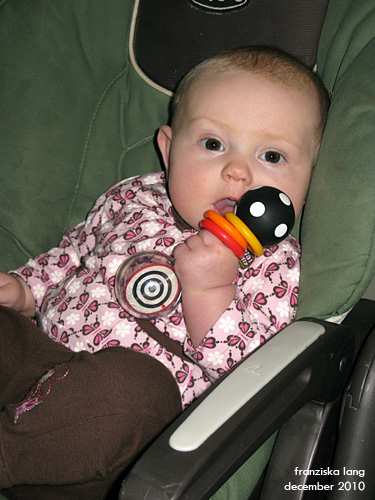 And then Vivian insisted that Annelee wear her "nicause shoe".  Maybe to prove the gift was really for her?  Kind of like the cinderella test?  I have no idea.  But I thought it was cute. 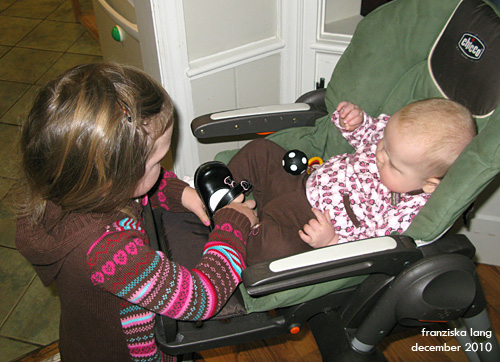 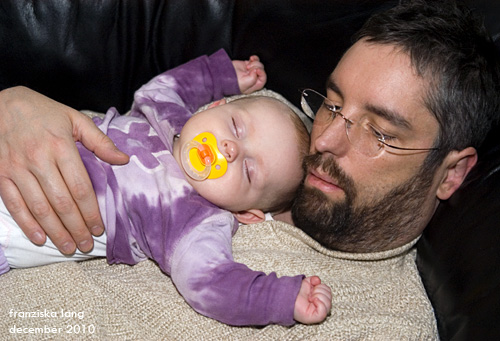 Email ThisBlogThis!Share to TwitterShare to FacebookShare to Pinterest
Labels: annelee

Will and I had been plotting the demise of the binky for a while.  We were both tired of Vivian's constant need for binky as soon as "bed" was mentioned (binky had been banned for daytime use over a year ago), not to mention the night-time wakings and wailings of "broooowwwwwnnnnnnn binkyyyyyyyyy" because she couldn't find it in her bed.

Could it be that easy?

We were going to visit Virginia for the weekend, leaving the day after her birthday, so thought it may be a good idea to let her have one last night with binky, get rid of it the next day, spend a few days in a different setting and then come back to a binky-free house.  But, no, Vivian insisted on her birthday to get rid of binky.

Will had come up with the brilliant idea of burying binky and having a lollipop grow in its place.  I took charge of the implementation (we make a good team).  A fancy lollipop and magic soil (also known as barley mixed with glitter) were procured in preparation of the big event.

That evening, Vivian collected her binkies from her bed, put them in the plant pot, covered them with magic soil and went to bed.  In bed, she suddenly realized what she had done when she asked for binky and we explained that she had planted it and couldn't have it.  But, she went to sleep without too much fussing. 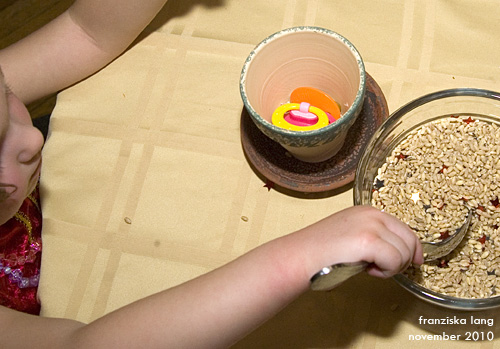 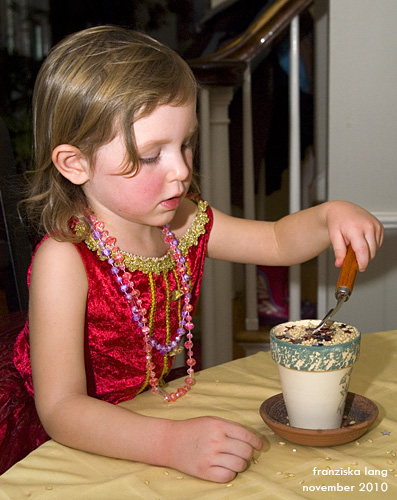 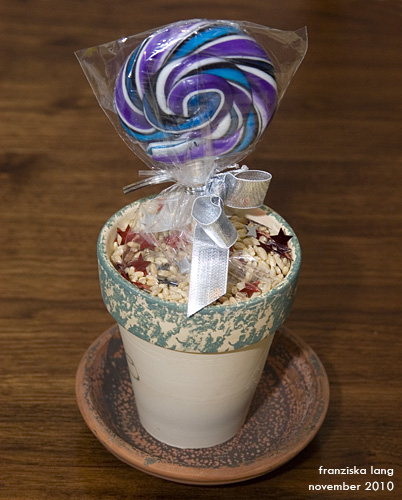 The next morning, we headed downstairs to see what had happened.  Vivian pulled the lollipop out of the pot and also tipped out the magic soil to check if the binky was still there (needless to say it was not). 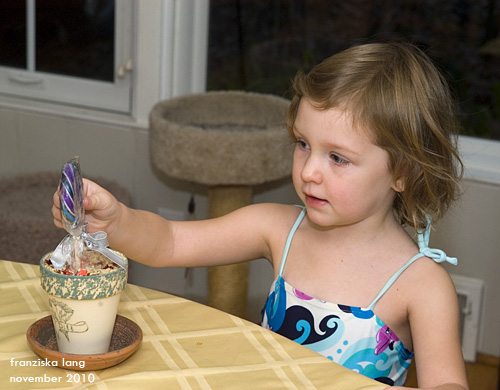 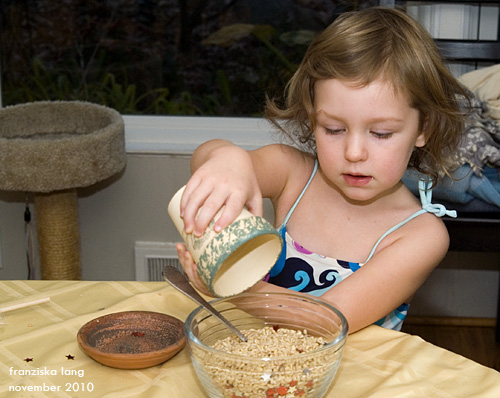 And that was pretty much that.

We got a couple more requests for binky during the next few days, but they were few and far between, and there were no tears or tantrums when we reminded her that it had grown into a lollipop.  Funny thing is, she never ate the lollipop, it's still sitting in a kitchen cabinet...

Let's just hope this is going to work just as well with Annelee, because she is just getting to the point where she can keep a binky in her mouth and it is becoming part of her bed-time routine ...

PS: I'm sure that at this point, you are barely even noticing anymore that she is wearing a princess dress in the first set of pictures and a bathing suit in the second.  In November.  I've given up trying to enforce any kind of sensible dress code while at home.  :)
Posted by Fraulicious at 12/15/2010 No comments:

Email ThisBlogThis!Share to TwitterShare to FacebookShare to Pinterest
Labels: vivian

One of the reasons I wanted to do the Advent calendar with activities is that it actually encourages me to do some of the things with Vivian that I may otherwise think "Oh, I can do that tomorrow instead".  So, we actually decorated a gingerbread house this year.  Rowan and her Mom Jenny came over to join us.

Lots of fun was had, and we'll definitely do this again next year, however, there are some important lessons that I've learned  :)

(1)  Which Kit To Buy
I had initially bought a kit that contained several small gingerbread houses, but those needed to be separated first before the houses could be built. Apparently, I'm not very skilled in that department.  In fact, Will called me a home wrecker  ;)  So I ran out (literally an hour before we were going to decorate) to buy a kit for a single big house that came in individual pieces.  The kit also came with a plastic base with grooves to aid in the construction of the house. Definitely something to look for next time!
(2)  Construction Timeline
Make sure the house is constructed at least one hour before decoration begins.  Or risk the roof sliding off and/or the walls collapsing.
(3)  Set Up
Instead of sorting the candy by type, give each child a bowl with a mixture of candies to decorate with.  Prepare enough icing (colored icing is a big bonus - see Exhibit B above) and cover the table in plastic.  Get the kids half naked.  They are not old enough to feel the cold yet. It all makes for easy clean-up.
(4)  Icing vs Candy
As it turns out, the girls got even more into the icing than sticking the candy on the houses (although they enjoyed that, too).  Way too much icing and candy was consumed.  Record (and play on a loop): "Please don't eat any more icing.  It's the glue to hold together the houses, it's not for eating.  Please stop eating the candy.  It is for decorating."  Better yet, stop calling it "icing" and "candy" and start referring to "glue" and "decorations".  Oh, and you can never put enough icing, I mean, glue on a gingerbread house.  Ever.


(5)  End Results
Fabulously decorated houses.  Next time, I'm going to let Vivian do the icing (I had started it this time, but quickly conceded everything) and the decorating.  Can't wait to see what the next house will look like.

Vivian had not grown since her 2.5 year appointment according to their measurements (still 42" or 106.5 cm), but had gained some weight (38lb, up from 34lb).  Her height/weight ratio is perfect according to the pediatrician.  I like that woman, she uses the terms "perfect" and "wonderful" a lot when it comes to our children  :)

She is still impressed by how verbal Vivian is and how well she enunciates things (for her age at least), and kept stressing how important it is for children her age to drink milk with their meals (which Vivian does).  I think that's definitely the pediatrician's hot-button topic.  If your child drinks milk, all is well with her world.  LOL.

Annelee had gained a ton of weight (I knew that, just not how much).  She is now 26" (66cm) tall (just a half inch shy of Vivian at the same age) and weighs a whopping 16lb 5oz (7.4kg) which is a full two pounds more than Vivian at that same age.  Can we say lots of delicious baby chubbiness?  :)

Both got their shots.  One for Vivian, three and an oral vaccination for Annelee.  Where Vivian managed not to cry, Annelee more than made up for it ... she was outraged!!!  But luckily, she calmed down as soon as it was over, she even managed to smile at the nurse at that point.

While Annelee got her shots and we were all distracted, Vivian managed to put good use to the extra band aids the nurse had given her ... she stuck them over her nipples.  And on the way out, she asked me "Can I drive?"  That girl cracks me up!

Vivian doesn't need to go back until she's 4, Annelee has to go back in 2 months.  Let's hope her weight gain slows down a bit by then, otherwise she soon won't fit into any of Vivian's old clothes ...
Posted by Fraulicious at 12/06/2010 No comments:

Until recently, Vivian used to shower either with me, or by herself (with my help).  Since Annelee has started bathing though, Vivian has decided to switch back to bathing, too.  So, on a bath night these days, we do the following:

I run the bath for Vivian, she dumps all her toys in, gets herself undressed and gets in.  In the meantime, I run Annelee's bath (in the baby bathtub on the floor).  While I get Annelee naked, in the bath, washed, and out, dried and dressed, Vivian happily plays with two of her bazillion toys that float in the bath with her - a squeezy bottle and a tupperware container.  Sometimes, she adds a washcloth, too.  The rest of the toys are ignored.

Next, I hand Annelee over to Will, soap Vivian down, wash and rinse her hair and then she gets out, too, dries herself off, puts on her jammies and is ready for the rest of our bed-time routine.  It works like a charm!

Here are some pictures and videos of them splish-splashing about in the bathroom.  Bath time is fun!


A video of the girls splashing in their respective tubs

And here are some earlier pre-blog bath pictures of Vivian!

I'm still working on more photos from Vivian's actual birthday, as well as our trip to Virginia; but in the meantime, here are some from her party with her friends a couple of Mondays ago.

Considering how many people we had in this space (4 kids, 3 babies and 4 adults), it really went well.  The kids played with remarkably little intervention from the adults, the adults actually got to chat a bit, and everyone had snacks, too.  It was fun!

At the last minute (quite literally), I decided to make an advent calendar for Vivian.  I had been planning on getting her a chocolate one and then maybe making something for next year, but I kept reading various blogs where the calendar contained activities.  I liked the idea, so I made one out of a bunch of envelopes.  I managed to hang it up shortly before midnight.  Some of the envelopes are still empty, but I will be able to fill them before we get to them.  :)

Vivian opened the first one today (candy, not all of them are activities, especially on daycare days) and while she liked the concept of the candy (as expected), I'm not sure the concept of the calendar will fully sink in this year (again, as expected).  I am considering this my dry-run to determine which of the activities I like and want to repeat in future years.  Next year, I will make the calendar completely out of the little gift bags - I think that will look really cute - and it will be harder to tell if they contain a note for an activity or a toy/candy.

Some of the things we'll do is make a gingerbread house, look at the Macy's Christmas decoration downtown, watch Rudolph the red-nosed reindeer, drive around and admire Christmas lights, read Christmas stories, etc.  We'll see how it goes.

Please excuse the poor quality of the photo  :( 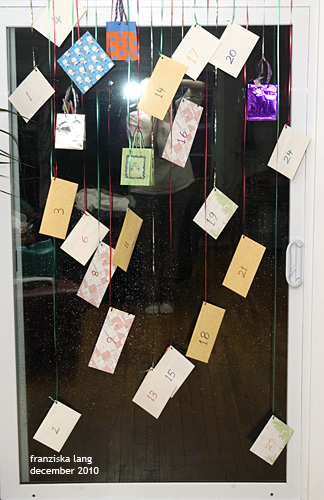